Sugars on keto are probably one of the most confusing things to get your head around when transitioning onto a keto diet. Getting your head around net carbs is one thing, and then sugars is normally the challenge that comes after that. Then, once you’re happy knowing which sugars are keto and are not, how much, if any do you deduct from your total carb count. Confused? You don’t have to be, we’ve got everything you need to know about which sugars are and are not keto for you, what % you can deduct from your carb count and so much more.  So, less talk, more action, and let’s find out, is yacon syrup keto friendly?

Let’s cut to the chase, Yacon Syrup is not keto friendly. That does not mean that you cannot still enjoy sweet treats on keto. There are plenty of keto friendly sweeteners available for your keto cooking, baking, and candy making. You do not have to miss out.

Keep reading and we will take you through which sugars are keto friendly, and which to avoid. We will also guide you through what polyols are and when and how much you can deduct from your total carbs in order to calculate your net carbs.

Finally, we will take you through which are our recommended keto sweeteners that you can enjoy guilt-free, whilst keeping your body in ketosis and fat adapted.

If keto is new to you, why not check out our keto beginners guide. There are a lot of acronyms and terminology used in the keto world that can make it feel like you are having to learn a new language. Don’t worry though, we’ve got you covered with our articles on keto abbreviations and keto terms explained.

Getting your keto sugars right will help you on your keto journey and help you achieve your goals.

So, let’s get into it is yacon syrup keto friendly?

What is Yacon Syrup

Yacon Syrup is made from the roots of the Yacon plant, which is largely located in the northern and central Andes. It is composed of a combination of fructo-oligosaccharides (FOS), inulin, glucose,  and fructose. It is thought to lower blood sugar levels.

How is the Glycaemic Index of a Sugar Relevant to Keto?

The GI is rated from 0-100. In simple terms, it measures how quickly a food will affect your blood sugar(glucose) levels when you eat that food, or in the case of sugars, normally a food that contains the sugar.

If you have been living a keto diet for any time, you will likely know that one of the main aims is to maintain static blood sugar levels. It is the spiking up of blood sugar levels that leads to that euphoric feeling, followed by a feeling of hunger, which makes you want to eat more.

It is by controlling these blood sugar levels which prevents cravings for further sugary foods.

If you have diabetes or know somebody who has, they are probably very conscious of the GI value of a food as they will use this rating to help control their blood sugar levels.

Foods scoring zero, or as close to zero as possible, will not spike your blood sugar levels. These foods are broken down more slowly. Foods that are closer to the higher end of the GI are broken down quickly in the body causing a rapid increase in blood glucose levels. This is also known as a ‘sugar rush’. Once this ‘rush’ has peaked, we then start to feel rubbish in ourselves and crave another ‘rush’ to make us feel good again.

It is for this reason that sugars are limited on the keto diet, if not your blood sugar levels would constantly be yo-yo-ing. This is not healthy for anybody. More importantly, it will make it very difficult for your body to remain in a state of ketosis.

In this article, we will take you through which sugars to avoid and which ones are safe to consume.

If you are interested in finding out more about keto sugars, check out our ultimate guide to keto friendly sugars, which will take you through everything you need to know.

So let’s look at the question, is yacon syrup keto friendly?

Let’s look at t a few key facts about Yacon Syrup so we can better understand whether it is keto friendly or not.

FDA Approved?: Yes – Yacon Syrup is approved by the FDA for consumption

What Foods is Yacon Syrup Normally Found In?

Sugars are used in a wide variety of goods in order to add flavor. Often these sugars are hidden in foods that you would not expect to find them in.

Some of the foods in which you are likely to find Yacon Syrup are;

How Many Net Carbs are there in Yacon Syrup?

Net carbs and the total amount of carbohydrates found in food that is digested in the body and used as energy.

Net carbs are calculated by subtracting fiber from the food’s total carb count.

For more on net carbs and how to calculate these check out our article which is dedicated to net carbs.

Number of Net Carbs per 100 grams for Yacon Syrup

There are 3g grams of net carbs found in Yacon Syrup.

How Sweet is Yacon Syrup?

Sweetness is compared to granulated sugar, aka table sugar.

Table sugar is classified as 100%.

Yacon Syrup is recorded as being 70%.

This means that Yacon Syrup is less sweet than table sugar.

So, Is Yacon Syrup Keto Friendly?

So far, we have been through what Yacon Syrup is, the GI of Yacon Syrup, and how many net carbs we can expect from the sugar, but, is yacon syrup keto friendly?.

Yacon Syrup is NOT keto-friendly.

It being high on the GI, this means that it is likely to raise insulin levels and lead to glucose being released into the bloodstream. Such sugars should not be consumed on the keto diet. Furthermore, consuming high GI foods will lead to, sugar cravings, which will, in turn, make you feel hungry.

Now you are a master of keto sugars, why not have a think about what your keto goals are and set a plan as to how you are going to achieve them to smash your NSVs.and truly enjoy the benefits of the keto diet .

Still want to know more about keto sugars? Click on the sugar you are interested in below in order to find out more.

Which is your favorite keto-friendly sugar and why? Let us know in the comments below. 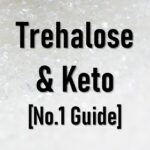 Why Do I Feel So Good On Keto? [And How To Keep It That Way]

You may be wondering, ‘Why Do I Feel So Good On Keto?’ It’s a legitimate question, to which there are many answers. There are a number of physical and psychological reasons why you feel so good when eating keto. In this article, we will take you through all of the reasons why you feel amazing, and how to ensure that continues.